I’ve changed my tactics slightly while designing this level, so that I can essentially design and test simultaneously. I’m trying to keep level layouts varied and involve new challenges for the player with each level, but it’s been difficult to judge the success of drastic changes on paper. So my new process is: draw, test, redraw, test, create!

The kanji for “blue” which I’ve based the level 3 layout on is: 青, which gives the opportunity for a lot of long horizontal platforms. Unfortunately, I ended up with a lot of these after creating the level based on the kanji for “orange”: 橙 (it doesn’t look like it has many horizontal lines but I ended up putting a lot of emphasis on the small lower section on the right hand side!) The long, straight parts of the previous level are pretty much the most boring game sections I’ve made so far, so I really wanted to avoid them this time round. 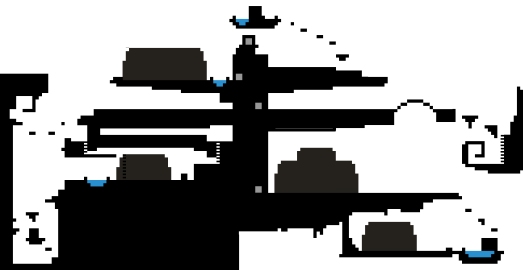 I started off with this level mock-up, which like all of my other level designs has ended up looking nothing like the original kanji! The blue patches are “onsen” hot springs, which are the unique little features in this level. In Japan, accommodation and bathing facilities are often placed near onsen, so I’ve placed the buildings near the hot springs. I’ve also tried to avoid placing buildings in the level’s four corners, which seems to have inevitably happened in levels 1 and 2. This level is unique however beacause I’ve only placed one cave, which is larger than all previous cave levels and connects more parts of the level. It’s difficult to see in the mock-up, but I’ve placed grey squares where the entrances and exits are located. My main concern with the mock-up is that there are still a lot of long, straight platforms, but at this point I printed the design to work out the rest on paper.

When I printed the layout this time I didn’t join the two pieces of A4 paper together, so I’ve ended up with two halves which were really easy to scan! You can see the detail in this design much better than in my previous photos. The level starts in the bottom left-hand corner, where the warp door object is. I’ve got a few more tiles to create for this level, mainly where the onsen are. The structures around the onsen are based on this image from Onsen No Tengoku (Onsen of Heaven) in Hakone. The travel guide describes the site as “slightly run-down but remains atmospheric”, which I though fit in perfectly with my rural setting. 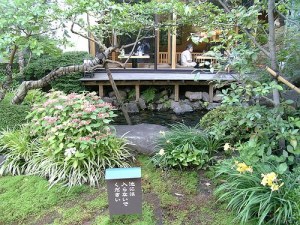 In this design, I’ve added a section to one of the long horizontal platforms to break up some of the length and add more rises and falls. The idea was to place obstacles where there are large gaps between the platforms, however I had to change this idea again when it came to testing because some of the scaling didn’t work well- this is main disadvantage to designing on paper with no grid! After drawing up the design, I roughed out the platforms in Game Maker to test the changes and jump distances between platforms etc. I’ve spaced out a lot of level more than usual to make the path less decipherable, and it seems to have worked pretty well. I’ve since added a lot more detail to this first half of the level, using my new blue-coloured tileset! You can see the platforms in the room editor in this screenshot: 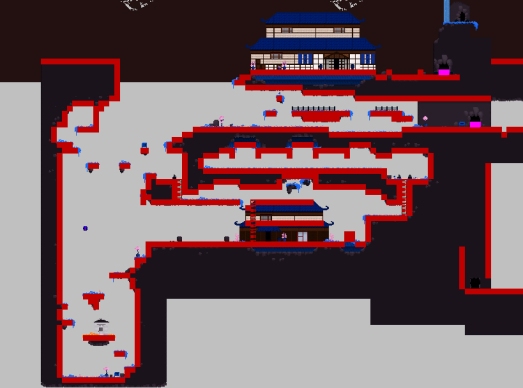 The solution to the problems with lots of straight horizontal sections seems to be the obvious answer. I’ve made the lengthy run seem less “lengthy” by adding jumps that create thinking points for tactical evasion, as you can see here in a section which original consisted of one long horizontal platform. When making a platformer, think with platforms.

The second half of the level is still incomplete, I’ve simply added in the basics of the platforms for testing. I drew up the rest of the level today, so this should be filled in soon. There are still some platform changes to be made. 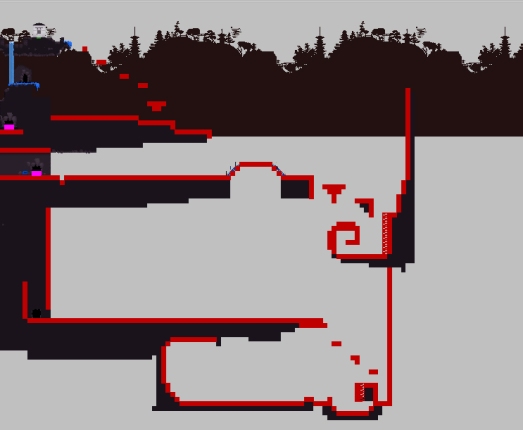