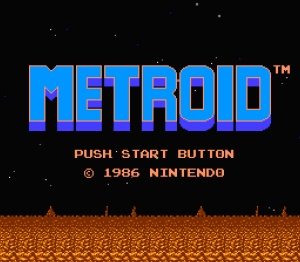 Most interestingly is that I hadn’t noticed this yet in any of the game I’ve previously written about on this Blog. In my head, I think I assumed that character sprites needed the extra detail provided by double height.

In Fez, Gomez measures the exact same height as the background tiles (with the exception of The Fez which sits on top of this height).

Again, in The Archer the character sprite and tile height are very similar, except for hats which seem to cause the illusion of height in games!

In Jonathan Lavigne’s Ninja Senki, the character sprite is not only the same height as the background tiles but is a pretty similar width too!

And in Cave Story, the character sprite for main character Quote is the exact same height as the tiles, however the NPC character is slightly taller.

What confuses me about this selection of new(ish) games, is why they all decided to work to these proportions. From an aesthetic point of view, I think it makes everything look neat and tidy, as every aligns nicely to a consistent grid. I can imagine that from a gameplay perspective, these proportions work in the favour of the player who must calculate jump and fire distances etc. However when I looked back at old NES platformers like the original Castlevania, Contra, Ghosts ‘n’ Goblins and Metroid it seemed that traditionally, character sprites were double the size of the background tiles (actually, in the case of Contra I couldn’t decide what size the tiles actually were, so I could be wrong!) 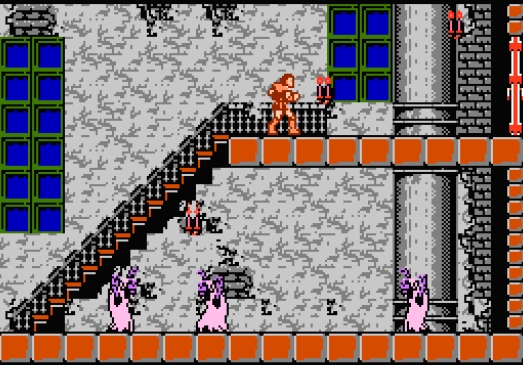 Background tiles half the height of character sprites: 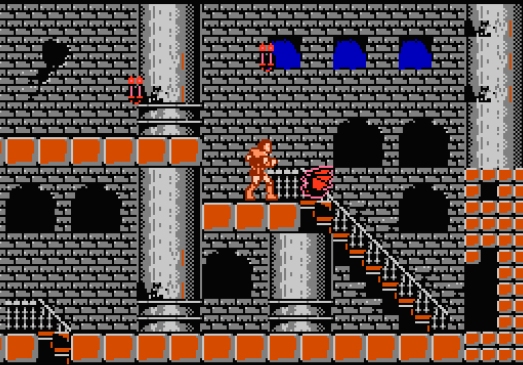 One slight exception I found amongst old NES platformers, was the original Super Mario Bros, and similarly Kirby’s Adventure. In Super Mario Bros, Mario starts the game as a half-sized sprite, which is roughly the same shape as the background tiles.

However, this reduced size is probably just a way to leave room for growth when a mushroom is eaten:

This might similarly explain Kirby’s small size in Kirby’s Adventure, as Kirby expands when swallowing an item or enemy.

In this case, it’s probably just more likely that Nintendo have tried to show how small Kirby is in comparison to the world!

Even as we move into the world of 16-bit, sprite sizes remain consistent with previous versions of games. In Super Mario Bros 3, the sprite proportions remain pretty much the same as the original. In Super Matroid for SNES, character Samus seems slightly taller than before. She does wear a helmet though, so this additional height is another one of those hat things…

So the question is “who is right??”
After reading various forums, the general consensus is that it all dimensions are entirely the choice of the designer. There is no right or wrong, or good or bad. Which leaves me at a point in development where I need to make a choice… So for now, I’m going to concentrate on creating a sprite equal to the height of my (hypothetical) tiles. This means creating a sprite which is 16 pixels in height, rather than the 32 I was expecting to be using. Personally, I think this makes the game look nicer and hopefully will make it play fluently. I will have to convert if I find it difficult to add a decent amount of detail to my sprites, or if the space limitations make it difficult to animate, although I’m feeling pretty confident and inspired by my Indie Heroes who have proven 16px sprites to be ideal!

Interestingly enough, over 50% of my chosen Indie heroes are Canadian. Today I’m broadening my world a little by focusing on Daisuke Amaya, the Japanese creative genius behind Cave Story. 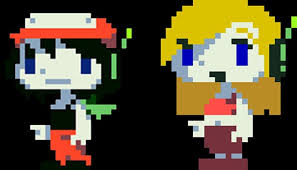 Cave Story has been brought to the attention of the masses in the last year, gaining a make-over for the Wiiware and Steam versions of the game, and a complete conversion to 3D for the upcoming 3DS release. But years before all of this, Cave Story was a simple 2D shooter which gained appreciation from a small cult audience. It was this audience who created an English translation patch for the game, gradually spreading the phenomenon worldwide.

And this all happened way before the whole retro pixel-art movement really took off (in the Western world at least!). The chosen graphical style was an echo of the game’s genre and functions- ultimately the player is required to traverse a 2D world acquiring weapon upgrades in order to shoot and gain experience from anything in the way, very reminiscent of early Metroid games. There is a story to follow, and if the player wishes, gameplay can be quite linear. However, if the player decides to backtrack at certain times, progress can twist and turn and secrets can be revealed. It has an exploration undertone which adds a layer of enjoyability to the game.

From these you can see how Cave Story adheres to traditional development, therefore appealing to the player’s sense of nostalgia….
1. Indoor shots contain the player in a small space, surrounded by a black screen.
2. Outdoor shots show a full-screen world. Text boxes showing dialogue appear at the bottom of the screen. If a non-playable character is speaking, then quite often a character portrait would appear next to the text. Noticeable in this example: the HUD disappears while a message is displayed.
3. Powerups appear as capsules and health pickups appear as hearts. It’s just tradition. The HUD here allows the player to scroll through each weapon, and also displays weapon progress and player health stats.
4. The inventory menu allows the player to scroll through carried items and weapons, displaying information on each.

Rumour has it that Cave Story took years for Amaya to finish as he took on every production role personally. The game was then released as PC freeware, which I think is because Amaya creates for love not money. As fortune would have it, his game went to gain huge commercial success… And it’s success is probably due to its nature. It is a very traditionally made game, with all the features of a traditional side-scrolling shooter, however it surprises the player with unpredictable additions, which occur if the player chooses to play non-linearly.