This week I’m thinking about all the features I want to have in the game before handing it to others for feedback! I think in my original time-plan I wanted to base the product of this week on feedback from participants, but I’ve gone into some of the graphics in a lot more detail than I was expecting to and as a result have a few other things that need rounding off/actually making… So my goal for this week is to create a working prototype ready for testing either at the end of this week or the beginning of the next.

One of the major things which I have omitted until now is, to summarise, how to loose whilst playing Hanami. I’ve implemented a really basic health system so far, which can currently only go down, and instigate an immediate game-over is it reaches 0 (which it can’t, because I haven’t put enough hazards in yet!) This is one of the things that needs a lot of improvement this week- it especially needs something to build it back up.

I’ve mentioned possible “hazards” or “enemies” before, and I’ve sketched out a few ideas in some of my level designs. The main feature of all enemies/hazards is that they cannot be “defeated” because there is no combat in the game. They are a part of the environment, and will not actively attack but will stand as a hindrance to players. As the collectable items are based on flowers, I’ve also based my enemies on plants, creating a good/evil balance throughout the natural world! Each enemy is also based on a unique movement type, to keep them varied and keep the player actively working out how to evade them.

The first enemy type is one that I’ve been using as a health system test, and is based on the Sakura blossom object. The idea is that it lurks in shadows and looks similar enough to the real Sakura object to lure players towards it, only to hurt them if they make contact. I’ve called this one the deceitful blossom, which is currently a working title name but may stick! Its movement type is nothing, it’s the easiest enemy to avoid as it simply sits in once place.

This enemy type has a few influences from existing games, not so much in terms of visual qualities but in attack style! I’ve looked at items and enemies that disguise themselves and attack at the last second. I thought of Vileplume from Pokemon which disguises itself as a flower, and the mimic from Braid which hides under the soil with a flower under its back. In a way it reminded me of the Mario “know you mushrooms” design seen on bags & T-shirts etc. Many Mario mushrooms look similar, but have very different effects, good and bad if acquired…

The second enemy happens to be a mushroom, but nothing like a Mario mushroom unfortunately. Unlike the other enemy types, a name didn’t pop into my head straight away with this one, so it is currently called Hello Mushroom…for a number of irrelevant reasons… This enemy doesn’t move itself, but it sprays a vertical line of deadly fumes into the air at random times through one of its many sphincters, which will deduct health points if touched. Most of my house mates have a serious aversion to mushrooms and try hard to stop themselves from vomiting when I cook them, so I’ve made this one super gross to fit their opinion of them. I think mushrooms are really yummy personally.

To get the motion of spore-release, I’ve been playing around with the particle functions in Game Maker today. I found a great guideline to all the available functions in a downloadable PDF here, which literally misses nothing! But so far I really have only been messing, so I’ll write up about my proper particle experiments later!
This guy’s kind of inspired by the many monster mushrooms in video games, like Funguar from Final Fantasy VIII, the Fume Shroom from Plants vs Zombies, and of course the deadly mist emitting Black Fungus from Kingdom Hearts. 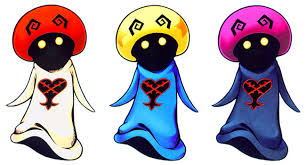 The final enemy is one that moves horizontally by swinging from ledges and cave roofs etc. I’ve called this the Hanging Adversary, mainly because it was the first enemy I came up with and I wanted to differentiate it from any other potential creations! The hazard here is really sharp leaf-type structures- I said I didn’t want to feature any cliched spike-pits, so this is my original equivalent. I’ve fashioned it after a venus fly-trap to some extent, simply because the venus fly-trap has those naturally evil-looking teeth which make for a great game enemy. I’m sure they’ve inspired many monster creators to make plants that bite.

I had to be careful that this guy didn’t end up looking too much like anything else from the gaming world, although influences can natural be seen to the Mario Piranha Plant, and similarly the Venus Flytrap from Braid which was probably based on the Mario enemy! My favourite of the carnivorous plant monsters from games has to be the Deku Baba from the Legend of Zelda series, which looks so spiky and evil even with the lowest of poly-counts!

I’ll hopefully get all of this into the game tomorrow, and adapt the health system accordingly!