I guess this is a little like brainstorming, only it’s more of an explosion of words. I can’t think of a better name for it, especially one that sounds as exciting!
I got this idea from Gabriel Verdon at the beginning of his Devlog for The Archer. He begins development with a quick introduction to the concepts behind the game, and his objectives for the finished result. As a quick introduction to the characters and settings for the game, he takes a simple statement and pulls apart separate words to explain further details. With the ideas I’ve got at the moment, I guess my opening statement would be:

To make the statement a little more specific, I thought I would expand it to:

A long girl travels through the empty streets of Japan collecting Cherry Blossom after Hanami. 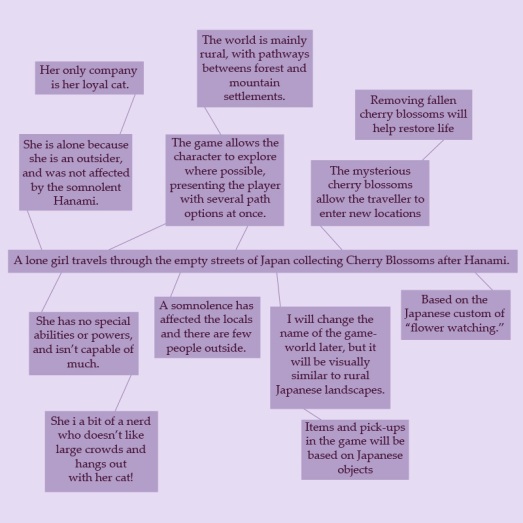 It’s still quite a vague overview, but I’ve left room for improvement ^_^.

-Hanami- Gameplay is based around environmental obstacles. The player must find blossoms in hard-to-find or hard-to-reach locations, although I’m not sure yet whether this will be with the aid of special abilities or if the challenges will be fairly similar the whole way through. This will ultimately depend on what I manage to program.

-Feel of the game- There will be a conflicting sense of both loneliness and serenity throughout, achieved through lack of player communication and a peaceful setting.

-Symbols- Japanese written characters (Kanji) will appear throughout, as well as traditional Japanese symbolism such as the Sakura blossoms themselves, which are an ephemeral symbol of mortality.

-Music- I would like the music to sound like a typical “game soundtrack” (repetitive, electronic, catchy yet annoying.) But I also want to base it one traditional Japanese tunes, to help the game feel authentic. Throughout the project I will be listening to a lot of Gackt and Nobuo Uematsu for inspiration, but no changes there really!

-Movie Influences- Studio Ghibli’s so-called “Blue Sky, Green Grass” films- Laputa, Porco Rosso, Kiki’s Delivery Service… but also My Neighbours the Yamadas for a little insight into Japanese life, and anime like Angel’s Egg and Cat Soup for the sense of journeying through strange, lonely worlds (these second films also add a sense of darkness, which is something I’m currently toying with.)

-Game Influences- The Archer for its incredible use of Game Maker and beautiful concept and asset artwork, Ninja Senki for its Japanese themes and simple graphical style which create a great example of everything a platformer should be, and Nevermore 3 for its representations of isolation and loneliness in a beautiful world.

-One thing I really want to get across is problems with communication in a foreign place, and a lack of understanding of signs and symbols. I want there to be minimal dialogue throughout the game AT BEST, the player will have to rely on their own interpretation of symbols, imagery and gestures in order to get through the game. Some will be more complex than others!

-Verdon goes into a lot of details on his post about the inventory system, and how it acts as a means of providing higher-resolution details of items and characters which don’t appear very detailed in the actual game. This is definitely something I will consider! There will be items and pick-ups to help the character along, however I’m not sure what these will be yet.