Apart from perhaps a short opening sequence consisting of images or a short animations, Hanami begins in a small country bed & breakfast style building in a small village somewhere in Japan. These types of accommodation are called Ryokan. They are usually situated in more rural areas rather than large cities, and provide a cheap place to stay for travellers. Cons of cheap accommodation mean that rooms and facilities must be shared with other guests, but at the same time this opens up opportunities to meet people and share a truly Japanese living experience. Personally I prefer “private”, but beggars can’t be choosers!

I refer to a stay at a Ryokan as a “truly Japanese living experience” because one common characteristic of the Ryokan is its traditional Japanese features. The owners of this sort of establishment encourage guests to turn Japanese during their stay, by sleeping on futons, sitting at low tables, and usually eating the provided Japanese meals. Features of a traditional Style Japanese room or Washitsu:

Tatami Floors
These a woven floor coverings, aligned as a series of mats.

Shoji Sliding Doors
These structures, made from wood and paper, act as room dividers but slide to become doors.

Tokonoma
This is a small alcoved area where hanging scrolls and decorative items are placed. This areas is not entered, but enjoyed.

Zabuton
Flat cushions (sometimes with a back-rest) placed on the floor around a low Japanese table.

For my Ryokan, I’ve taken most of these elements and aspects from other traveller’s hostels. Cheap hostels are similar to Ryokan, but not as traditional. To make better use of space for example, hostels will often house guests in shared rooms with bunk-beds. In the most extreme circumstances, guests stay in their own tiny capsule, consisting of a bed, shelf and TV! These are much more common in urban areas.

In terms of 2D tile creation, bunk-beds make a lot more sense that low, flat futons! So I’ve built my Ryokan on three floors. The hotel has a Western-style bunkbed room at the top, and gets progressively more Japanese as it goes down. Bear in mind that this is a test mock-up, I can hardly even call this finished! I’m still trying to work out some of the tile issues.

If you click on the image above, you can start to get a feel for the real scale of the game. At the moment, I’m thinking of up-scaling the game to 300% during play, although this is something I haven’t decided for sure yet.

One thing I haven’t quite worked out yet is how to cross-section a Japanese roof to create a 2D tile. The blue around the edges of the image are supposed to be blue roof tiles, but these aren’t quite finished yet. The wooden part underneath is representative of traditional ceiling beams, although I’m not sure how well this comes across in cross-section form either…

You can probably tell from the image that I’ve also had a few problems rotating my roof tiles, and there are plenty of inconsistencies to be found… 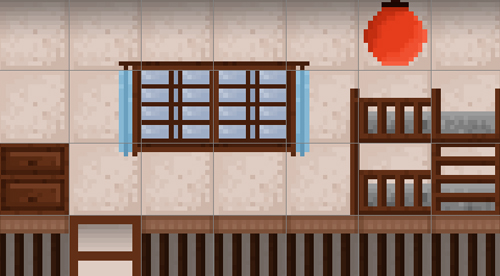 I’ve resized the bunk-beds from before so that they are more human sized, and cleverly pushed two together so that the obscene length doesn’t seem out of place! The bunk-bed tiles probably won’t need too much attention from now on, as there isn’t much to them and not much that can be changed. The window is a set of four tiles, which can be lengthened width-ways if I should need to! I’m fairly happy with the result of the window, I just know I should be cautious with frame outside the four-square area. The little draws are just one tile, and can be stacked or duplicated length ways easily. I’ve tried to keep all wood-colours consistent.

Wall Ties
These were looking very plain and boring, so I tried to add a certain amount of texture to them. I’m worried that now they border on the messy side, and will hopefully be tweaking these.

This is part of the shared “communal floor”. The proportions seem like less of a problem on this floor, I’ve created a sofa from two tiles and halved the draws to create an end-table which is only half a tile high (the red strip on top represents the place the Maneki Neko likes to sit!). The chairs to the right of this screenshot are the same height as the sofa, although I’ve made sure that this emphasises the lowness of the table.

You can also see from this screenshot where I’ve tried to add shading under the roof tiles using “floating” semi-transparent tiles which adjust the tiles beneath them.

Ladders
With this sort of perspective, drawing staircases are a bit of an issue. I’m not sure Ryokan even have first or second floors, but I think it would be understandable in this kind of situation to have to climb a ladder! In my opinion, this doesn’t look out of place, but if I make a successful staircase then I will replace the ladder. 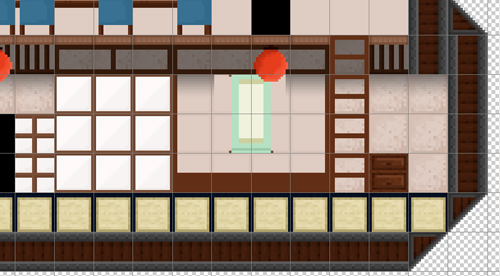 Here you can see all the traditional aspects of a Japanese Washitsu that I’ve just mentioned, although I still have some not-quite-aligning elements which may need re-scaling in order to fit better into the grid. I’m also not sure I’m happy with the wood-strip detail on the wall. I think it detracts from the room’s important details.

Tatami Floor
The ground floor tiles are supposed to look like Tatami, although I’m not sure they really do. It somehow doesn’t look much like a floor at all, probably because it is too square and therefore quite similar to the sliding doors above it. In fact, the sliding doors and the floor could do with a better indication of depth, to separate themselves from each other.

At the moment, the image covers a few layers in a Photoshop document. What I need to concentrate on, is creating a tile set rather than a flat image that looks like it has been made from tiles!